Are you getting screened out due to your own “stinkin’ thinkin’? 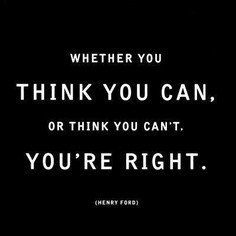 Two people generally decide on who gets an interview and later, a job offer. The first obviously, is the employer; the second is you.

How you think, how you approach opportunities, and how you communicate can be a barrier or can be the entry to employment. Negative self-talk such as I’m too old, don’t have the right education, don’t have experience at that level or in that industry, can become the type of “stinkin’ thinkin'” that affects your attitude, your willingness to keep trying, or your tenacity in being willing to make a cold call, connect with an old friend, or make a bold statement.

Just recently I had the privilege of working with a fabulous client; a fellow in his mid fifties with no degree who has made his own way in the world to become an executive. He was looking for another role after an organisational restructuring and his positive self-talk has been enormously refreshing. He is currently interviewing for five executive-level appointments, none of which are in his industry of expertise and it struck me why he just wasn’t plagued with self-doubt like so many clients I see.

On paper, it just doesn’t look so great.

I asked him about each so-called “deal breaker” situation, and to protect his identity, we’ll call him John.

Gayle: John, everyone I speak to is concerned about age and they tell me that their age is the reason for not getting the job.  How did the people interviewing you bring the conversation around to age?

John: Age? No, they didn’t really bring that up, but they did ask at interview what my plans were for the next ten years. I told them that I envisioned the final decade of my working life to be the most exciting; the one where all my experience and wisdom come together to achieve remarkable things. I also said that I expected two big jobs in that time, this one and one in about five years.

Gayle: So age wasn’t a barrier?

Gayle: You don’t have a degree, but the job advertisement indicated that the position required an MBA. What did they say about that?

John: Oh, funny you ask that… they didn’t actually ask! Guess it wasn’t as important as the job advertisement says it was. They were more interested in talking about my background and in asking leadership type questions. It was fun, and they were really nice guys. Interview went way past the allotted time!

Gayle: You don’t have experience in the industry. Did they say something about that?

John: Well yes and no. They didn’t actually come out and say that I wasn’t a match, but it was obvious they knew that I hadn’t been in the industry before because they talked about bringing in a fresh injection of talent; they wanted a person who could bring a new perspective to the company.

Gayle: Did you bring up transferrable skills to show you were qualified?

John is like a breath of fresh air; far from being obsessed by the attributes and flaws that some would see as a barrier, John didn’t even consider that they would be. He is so genuinely unmoved by potential barriers and has such unshakeable beliefs about the value he brings to the table, that he conveys that confidence to other people. They’re not concerned, because he’s unconcerned.

Do you let your own “stinkin’ thinkin'” sabotage your mindset and cast doubt in the minds of others?