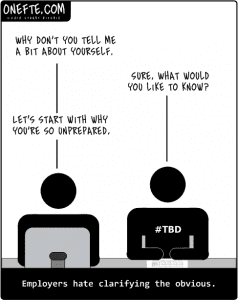 You don’t have to have a degree in it, you don’t have to be a card carrying member of Mensa, nor do you need psychic abilities. When it all comes down to it, being successful at interviews is largely about using commonsense balanced with truth.

Let’s look at some examples:

Interviewer: So Fred as a leader of the IT department, I’m sure you’ve had some significant project challenges along the way. Can you give me an example of one of those projects, preferably one where you had a few problems and how you think you could have performed better?

Fred: I have successfully led many projects but they have always gone without a hitch. I have always given 100% of my efforts and enjoyed great relationships with the entire team.

Answer Critique: “Epic” Fail. Fred is trying to whitewash the situation. It is simply inconceivable that every project was flawless and seamlessly implemented. Life is not like that, and especially in a technology environment. Secondly, Fred has not answered the question “How could he have performed better?”. In attempting to sound like the perfect employee  he is asking the interviewer to believe that he has never made an error. This is highly unlikely; we all make errors some time! As a result of this answer, the interviewer knows the candidate is sidestepping the question and responding with untruths. Either that or the candidate has no personal insight and cannot identify when his performance is lacking! If Fred is actually telling the truth, then he is flawed candidate! Why? Because he has admitted to not having to solve problems and not having been in a situation recently where rapid thinking and troubleshooting is crucial. Either way, Fred has made a significant error in responding to the interviewer’s question in this way. It didn’t need great intelligence, it just needed common sense and the truth.

Interviewer: Fred, have you had experience in introducing a new product into a saturated market and if so, what were the results?

Fred: “I was looking for a flexible, robust and scalable solution that was both cutting edge and world-class. I did a gut-check and opted to create a team dialogue embedded with a philosophy to spurn blue-sky thinking and instead push the envelope within the boundaries of fiscal bandwidth.  By leveraging this strategy we were able to create a paradigm shift, boost team synergies, and at the same time circle the wagons so we could get our ducks in the row for the product”.

Answer critique: “Epic” Fail. Top of the annoyance list according to interviewers are people who cite vague, jargonistic and incomplete answers. Instead Fred could have said: Yes, I led my team to launch the i-Pack 2.0 product in what was an extremely saturated market. The challenges were immense; market surveys had indicated that not only was the market saturated, but in some areas, it was in decline. It was important to first survey potential consumers, review competition products and see how we could create a product that met consumer needs for colour, texture and style…”. By talking plainly, giving an example of the how, why, when, Fred is drawing the interviewer into his story, not putting up a brick wall of business jargon.

Interviewer: Fred I see here that you were involved in developing policy for the new technology division. Tell me more about that in terms of your area of responsibility.

Fred: The reason we had to develop I2 was due to the changes in CANN. The PRB team decided that CANN was too restricted to meet Fedgov’s BRB strategy so it was decided to implement CANN2. The Department Head of EH&S indicated that with SAR at its core, CANN2 would be a viable strategy with great ROI.

Answer Critique:”Epic” Fail. Fred has made the mistake of again pushing his interviewer away by talking about internal operations and using acronyms that nobody, unless they were working within the same department or company would have a clue what he was referring to. Never put the person you are communicating with at a disadvantage. At a minimum he or she will feel small and stupid and worse if the interviewer will become disconnected from you.  If you cannot get your point across to the interviewer, you lose.