I’m out of a job! How the heck did that happen?

Sybil’s world has been rocked. Last week administrators took over her employer’s company and she is having a tough time coming to grips with what has happened. “I’m stunned!” she said. “One minute I was sitting at my desk and the next, men entered the office, instructed us to get our personal things and leave as the company was now in receivership! I just had no idea”.

Across the other side of town, Peter is working steadily at his desk. Things have changed in recent times. People are talking in corners and looking concerned; the air has become tense. Rumours abound about a possible merger or takeover and many are afraid jobs will be lost. Peter however, is scornful of the “time wasters” and keeps himself away from the “office gossip”. Head down, he moves his papers around and stares at the computer screen. If you asked him right now what was going on, he’d be dismissive. “Oh that’s just office politics” he’d say scornfully, “I make it my business to steer away from gossip and rumours”.

Two weeks later, Peter is made redundant following a merger. “It all happened so quickly” he says shocked. “One minute I was at my desk working, the next minute, out of the blue, I’m looking for a job!”.

Peter and Sybil both suffered the same fate because they chose in one way or another to keep their heads in the sand. Neither of them were tuned in to the office “vibe” and they failed to read the signs.

Sybil didn’t notice the increasingly frequent management meetings, the concerned looks, the many pointers that things were going badly wrong. She overlooked the banning of overtime, the leadership role that wasn’t filled after the unexpected and rapid departure of a key executive, the request that staff start using annual leave entitlements or cut down to shorter working hours.

All of these clues were there and yet Sybil didn’t see them or add them together to form a big picture overview.

Many of her colleagues did though. They were updating their resumes, scouring the internet job sites… being prepared just in case. While Sybil was reeling from the shock of her dismissal, her colleagues were interviewing for their next job.

And Peter? Well Peter deliberately ignored what was going on. He knew something was in the wind, but he stayed away from “office politics” choosing to play the part of the faithful employee; and he did so, to his detriment.

“Most of the successful people I’ve known are the ones who do more listening than talking.”Benard M. Baruch (American Economist and adviser to US presidents, 1870-1965)

In today’s uncertain times, employees who are complacent or oblivious to what is going on around them, are setting themselves up for some unexpected and unwelcome surprises.

Of course you don’t need to spend your days ignoring your job while you listen around corners, envisage conspiracies and plant bugs in the conference room! But taking care of your career and your livelihood is your responsibility.

Just as you need to think ahead in terms of where you want to be in five years and setting the plan to take you there, you must also be aware of what is happening around you, observe the changes in the workplace and anticipate when it may be time for you to jump ship or at the least, prepare for the unexpected.

After all, if you don’t take care of your career, who else will?

Start by taking a good look at your workplace right now. What do you see? 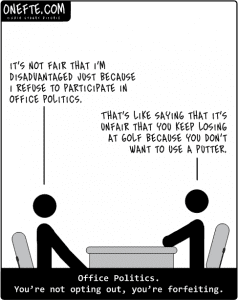