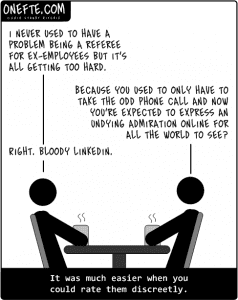 The buzz today is about networking. Everyone networks as we have been told it is the key to penetrating the hidden job market.

You find out more through talking to people than you ever could ploughing through the classified ads, which let’s face it, represents the largest pool of candidates for one job you’re ever going to be up against and where competition is the strongest. When someone says to you: “There were 800 candidates for that job” I’ll bet you it was advertised in the paper or on the internet. Makes sense doesn’t it?

Yell the loudest and you’ll get the most attention. From everyone.

Today, savvy jobseekers are posting profiles on Linkedin and Twitter, Facebook, Naymz and more all trying to connect with people who they hope will be able to do something for them. The problem is, no-one exactly seems to know what they are doing. Sure, add someone to your Linkedin list. Go for it. Now where’s the job?

To many people, networking means asking for a job.

For example: “I found Fred Smith. He used to work with me ten years ago at ADD Corporation. I asked him to be my buddy on Linkedin, he agreed, I asked him if he had anything at his company and he said ‘no’! So I guess this networking thing doesn’t work at all!”

This is common. People are running around adding contacts to online networking sites and then not knowing what to do or why they did it!

Let me share a recent success story of one of my clients. A senior executive, you’d think it would be relatively easy to pick up a new gig right? Wrong. Senior executives get the “You’re too qualified” tag daily. Once an individual has been a C-Level executive then recruiters and employers pigeon-hole him or her immediately. And when you’re at the top of the pyramid just how many opportunities that are within that narrow confine do you think there are? The average unemployed executive looks for his next gig solidly for a period of between 6 and 12 months. 6-12 months of wasted talent while “needle in haystack” jobs arrive. (And then of course you still have to be the successful candidate even when they do come up).

Here’s how my client, used his network to create a job that didn’t even exist.

First, he made contact with vendors, clients and past colleagues. Of course he made it known he was seeking a new opportunity, but there was no pressure. They didn’t have to do anything for him. There were no expectations or obligations. They were off the hook so free to accept a catch-up over coffee without the need to act.

In one particular conversation, the networking contact talked about the challenges of his job; just as we all do from time to time he bemoaned a project that had started out badly and was continuing to go “pear shaped”.  The candidate’s ears pricked up.

A project not going well? Had he just heard an opportunity?

One casual coffee and the candidate knew that there was a problem to be solved.

He also knew he could solve it.

Now the challenge. How could he get before and convince the main players that he was their knight in shining armour? The candidate contacted his network that he knew would have access to information on this project. More casual coffees and lunches, helped him build a greater understanding of this high profile project from a diversity of sources. Piece by piece the candidate started to put together the jigsaw. Snippets of information slotted together and key decision makers were pinpointed.

It was time to leverage his network to get an introduction from his friend on the project who was by now keen to involve someone else to take the pressure off.

At first, the meeting with the senior executive was just a “Let’s have a chat” session. However as the candidate demonstrated an in-depth knowledge of the project based on the picture he had put together, it was clear to the decision maker our candidate was going to be valuable.

In fact, after internal discussions, a position was created to deal with this project’s problems.

Guess who got the job? And from a candidate pool of one. Why start a recruiting campaign when the solution was before them?

This is the power of networking.

A job that didn’t exist, exists now. Cobbled together from some casual coffee and chats, a keen ear, insight and the confidence to find and present a solution to the person who needed it most and at the time he needed it the most.