Your Resume: Let it all hang out? Forget it!

Some time ago, a client shared her story while we were developing her resume. She told me about her life at the hands of her abusive spouse and how, after years of suffering, she fled the family home to a shelter leaving behind all their possessions and with her children in tow. Years later, she had regained her confidence, had settled into a new life and she had secured a job as an Office Manager; a job she liked and for which she had strong aptitude and a history of accomplishment.

Her ability to overcome adversity was impressive and I told her so; and that was when she said those jaw-dropping words “I’d like you to include that in my resume”.

“In your resume” I repeated, not sure I’d heard her correctly.

“Yes” she nodded enthusiastically, “I think it will show my ability to rise above problems, find solutions and organise”.

Fast forward a few years later. I was developing a resume for a woman who had a distinguished 15-year marketing career prior to her extended absence for maternity leave and later, caring for the infant.

“It’s very important to me that you include my maternity leave in my career history” she said. “It will show people that I can triumph over pain, that I have responsibility and I’m stable, and that I’m creative. I want to include quite a bit of time marketing that aspect of my life”.

Then there was the young twenty-something job seeker who wanted to me to include her lawsuit against her last employer for sexual harassment. “It’s important” she advised sagely, “That people reading my resume know that I left because of the harassment, not because I’d done anything wrong”.

Well, you’d think after twenty years in this business nothing could surprise me but in each of these instances, I was gobsmacked.

Why would these professionals who had so much to offer, want to invite strangers into their personal lives? Why did they think that that employers would be less impressed by their professional competencies and achievements and instead, choose to be exposed to recounts of daily beatings, the pain of childbirth, and sleazy workplace behaviours?

Granted these are extreme cases; but in each of these situations the jobseeker failed to understand what the employer was looking for in an employee. They were too invested in what they wanted to say, than what the employer wanted to hear and they had painted a mind picture of how to communicate these parts of their lives in a way that they believed provided a positive “spin”. The only problem was that they never needed to mention any of these things at all, let alone try to sell the lessons learned!

Before attempting to develop a tenuous link between your life experiences and your professional life, delve into what you have achieved in the workplace first.

There are many ways to showcase your true talents that are more appropriate for an employer to assess without revealing your private life to the scrutiny of a stranger! It’s a strategy that can precipitate future discrimination, fast track dismissal of your candidacy for a job, and provide ample evidence that you cannot distinguish what is appropriate and what is not!

Letting it all hang out? Forget it! 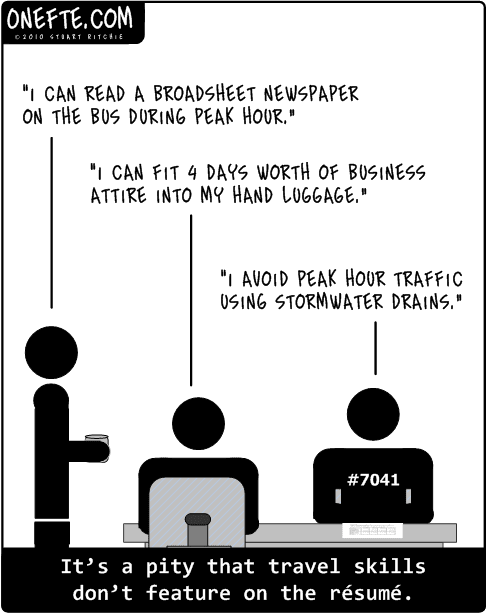