The Awesome Power of Linked-In

Of course I knew that Linked-in was a really powerful tool. You would have to have had your head in a bucket to have missed its rapid ascent over the past 12 months. (As someone said once, it’s like Facebook for grownups).

What I didn’t realise (and should have) was how you could get something wrong and get some pretty bad and unintended consequences and thankfully, how easily it could be fixed for a great outcome.

First, I’ll set the scene. Client: senior executive of multinational company, departing with an impressive golden handshake. As a high powered and communicative executive who has made a career out of building strategic relationships, he just doesn’t know any other way but full steam ahead! So armed with a next generation branded resume and a knock-em-dead online portfolio (that would be from me!), he has been making the rounds networking.

Which leads us to the next step of his job search arsenal: Linked-in.

As the client was considering doing some consulting in the future and had set up a business name, I suggested we use this on his profile so that headhunters looking for a passive candidate would come across him. (My long-held theory was that the longer a person is unemployed, the harder the it is to generate interest).

The consequences of this one suggestion were entirely unexpected. The client’s phone and email started to run hot. “Oh I see you’ve got a new gig already!” people were saying. “That’s great!”.

One-by-one the client had to explain — “Oh no, I’ve just started a new consultancy company, just me looking for something”. For every person who contacted him, how many saw that he was employed and therefore stopped having him on their radar to look out for new opportunities? This was not a good thing at all. We were unravelling all the good work done at the coalface in networking, by spreading the wrong message at the “back end”.

Remedy. Clearly a re-think was in order. I spoke with leaders in the field of executive recruitment both in Australia and internationally. Everyone concurred. As it is natural for a senior executive to have months between jobs, no eyebrows would be raised that there was a period unaccounted for.

What was important, was to get across that he was after his next big gig; get the message out to the widest group of people possible. So that’s what I did with the new philosophy of making every post a winner.

First, the title. As it is right under the name area, this is a golden opportunity to provide a brand statement and state your case.

This is what we did. Under the name advertising: CIO, IT Executive. Organisational transformations, $MM budgets, large scale operations. Ready for new challenges. Suddenly this is a one line statement selling his talents instead of a job title.

The next strategy was to reiterate the current situation. As Linked-in forces you to include a business name, we decided to choose “a compatible organisation” so that it made sense following the word “at”. In the job title, we wrote “ready for next opportunity in large-scale technology operations and organisational transformation”.

This automatically added itself under experience. So now the experience area looks like this: 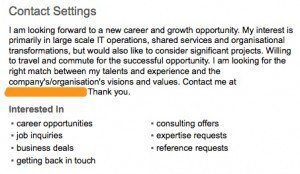 Feeling a lot more positive, we submitted the changes and waited.

It didn’t take too long.

Less than 12 hours later, the first email arrived from a former colleague. “Saw your Linked in profile was updated”, she said “And just wanted to touch base. I have just started a new project and would like to talk…..”

Of course it’s too early to see if it goes anywhere. The fact is though, that the new strategy worked in communicating the new message.

The power of Linked-in is awesome. But it can be monumentally messed up when the audience is misjudged! Fortunately it can also be fixed in a blink of an eye to get a substantially better result.

Do you have an amazing Linked in story where results were achieved so quickly from a few minor tweaks?