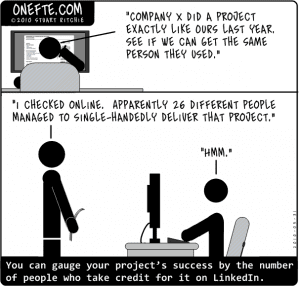 Communicating achievements is cited as one of the key issues jobseekers consider a real challenge.

Some people are reluctant to be frank about what they do well; they feel squeamish about recounting tales of how they distinguished themselves against their peers and consider it bragging (and we all know that nobody likes an show-off!)

As a result, people tend to talk in generalities to take the focus off themselves. They pepper their responses with words like “we”,”our” and “the team”. They think that by communicating in this manner that they will appear modest and a team player.

In fact what they have done is obfuscate the truth and make communications unclear. This can hurt a jobseeker’s candidacy for a job where clear communications not self-effacing statements rate highly on most employer’s wish lists.

The jobseeker, in trying to give credit to everyone from the receptionist to the CEO, actually gives nothing away about himself and in doing so, has raised a red flag about his candidacy. Is he camouflaging his true involvement because he actually let “the team” do everything? It wouldn’t be the first job search consultant who would mistrust the “we” defence for apathy!

I’m not advocating jobseekers claim ownership of something that isn’t theirs. For instance, asserting that you “Successfully built the world’s tallest building which was delivered on time and on budget” is quite a stretch if you were the receptionist who photocopied plans for the architect!

In fact, using this same scenario, thousands of people who would be involved in the design and construction of this building could claim the success as their own.

So this is what I’m saying: claiming success for something that isn’t yours to claim will make you sound like you are big noting yourself and it won’t be true.

Instead talk about your part in the team or project. You won’t sound immodest, you won’t be bragging about saving the world, and you will allow the people evaluating your skills and abilities to gain insight into you and what you do well.

Here is an example:

“I was fortunate enough to work on the design team that created the world’s tallest building. My role in the team was to research engineering that has been done in the past and see whether we could use any of these methods to achieve optimum building stability. I was given six weeks to complete this research and during this time I uncovered a new, yet little known technology that would be perfect for the type of building materials and geological layout that we needed to observe. I delivered my contribution to the team ahead of the six week deadline and I was pleased to see that my recommendations were adopted by the Chief Architect.”

Clearly this is not bragging, this is not claiming a world achievement and it is truthful. It communicates the role, the expectations of the task and what was delivered. This example would speak volumes to a decision maker who is looking for clear insights into a potential candidate’s work performance.

When a person is hiring you, it doesn’t matter what the team did or how successful the team was. What matters is what part you played in that team and what you contributed that made a difference.

It is right to claim what is yours.

Let “the team” take care of themselves.