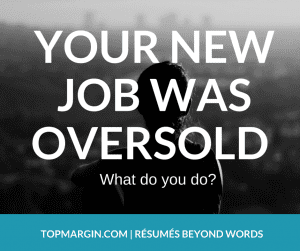 What do you do when employers misrepresent themselves?

I recently had a long conversation with a client who was highly disillusioned. When he decided to move to his current job six months ago, he agreed to a significantly lower salary but with the assurance of a six-month review as part of the deal when he was hired. At the six-month mark, he requested his review, but found out it was no longer on the table. In fact, after several ignored requests and cancelled meetings, his employer dismissed his request entirely, maintaining that she didn’t remember that part of the salary negotiation even though it had occurred only six months previously.

He was understandably upset, felt used and was considering leaving as he had made strong changes that brought in new revenues and streamlined operations. Unfortunately, having agreed to work with a significantly lower salary, he will likely have to use that as a starting base as he searches for a future job.

New jobs can fail to meet expectations in many different ways. Salary and other forms of compensation, responsibilities, promised opportunities for advancement, office location and commuting options, and many more things can differ from what you thought was offered to what you really get once you’re on the job.

Has this happened to you? What would you do?

First of all, if these differences have you saying to yourself, “I hate my job,” then by all means speak up. Not doing anything implies consent and you’re sure to get nothing when you say nothing. Request time to sit down with your supervisor or the person who hired you and show them your concerns by highlighting the issue in a way that is positive for you and the company. Review with them the duties you’ve been given and how you are spending your time. Then show the benefits to the company if you were able to redirect your efforts to what was originally promised.

Second, if you’ve only been on the job a few weeks, don’t start writing a resignation letter just yet. Many companies use the first 30 to 90 days as a trial or training period. That period of time can’t be considered an accurate reflection of what you’ll always be doing at the company. If you’re worried and things seem way off base, a few nonchalant chats with your new colleagues asking if they experienced similar trial periods when they were first hired might ease your mind – or let you know if it’s time to schedule a session with your supervisor.

Third, prepare yourself next time to avoid this situation by getting all promises and assurances in writing as well as doing your due diligence. Don’t rely on just what interviewers promise verbally in a private session. Talk to current employees of the company to get their insider perspective. Ask for a written description of the position, spelling out specific responsibilities. Some companies even offer the ability to “shadow” employees before you accept a position letting you get a taste of a typical workday.

Lastly, if you’re really suffering from a case of new job remorse, it might be possible to go back. If you absolutely know within a short amount of time that this new job isn’t for you, reach out to your old boss and see if the position has been filled. Providing that you exited from your previous job gracefully and on friendly terms, they might just welcome you back.

Moving on to a new job or position should be an exciting time, but in some cases like these it can be frustrating and even downright disappointing. No matter what you decide to do, always be prepared with an up-to-date, stellar resume (click HERE to see how we can help you with this) and captivating online presence so that you can immediately take action to correct your position and create new and better opportunities.