Arguably Australia’s most innovative professional resume writing consultancies, Top Margin’s reputation in terms of expanding our professional growth through education, and developing the services we offer continues to grow — as the business milestones through the years below will confirm. 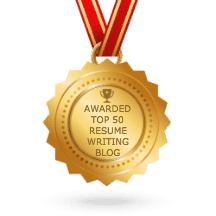 January 2018: The Great Aussie ResumeCreated and launched self-service resume writing course for people wanting to write a resume for the Australian market. Called The Great Aussie Resume, the video-based course includes downloadable templates, instructions on how to write a contemporary Australian resume, and everything you need to know about refining your content. Read more here:

December 2016: Listed in the Top Job Search Articles for 2016 from JobMob.

November 2016: Selected by Feedspot as one of the Top 50 Resume Writing Blogs on the web

November 2016: Acknowledged as one of the Top 27 Resume Writers of 2016 by Careertoolkit.

September 2016: Quoted in 5 Tips to get Your LinkedIn profile job-search ready by Michael Page recruiting

June 2015: Recipient of one of eCollegeFinders’ Awards for “Best Career Blogs of 2015″

September 2014: Recognised by CareerRocketeer as one of the Top 150 Career and Leadership Blogs for 2014

September 2014: Recognised by Your Personal Brand Name as one of the top international personal brand experts in 2014

January 2014: Recommended by YouTern as the Top 50 Twitter Accounts Job Seekers Must Follow in 2014. “Old-school advice in a no-nonsense style; the world needs that”.

October 2013: Interviewed and quoted in a BBC Capital article about global resume writing.

February, 2013: Acknowledged by LinkedIn for being in the Top 1% Most Viewed LinkedIn Profiles

January 10, 2013: Listed in the 100 Best Career Resources for Grads and PhDs on OnlinePhDProgram.org

June 2011: Completed training and gained certification as a “Certified Online Networking Professional (Linkedin) from The Academies.

October 2010: President’s Choice Award for Career Excellence. Each year, President of Career Directors International selects the individual who has made the most significant contribution to the association and the careers community for this distinguished award.

May 2010: Gayle Howard appointed Director of the 2010 TORI Awards for Career Directors International

March 2010: Article on managing client expectations used for teaching purposes at the annual conference of The University of Iowa’s Dual Career Network

February 2010: Several articles written by Gayle Howard, have been selected for publication on job boards and related sites by the International Society for Pharmaceutical Engineering www.ispe.org

October 21, 2009: Third place getter in two categories in the 2009 TORI Awards. Best New Graduate Resume and Best Creative Resume. Gayle holds the honor of being the first and only resume writer to have won TORI Awards for nine consecutive years.

April 4, 2009: Top Margin is proud to announce our newest strategic alliance with Digital Career Services “Win the View“–a solution that prepares and educates senior level and on-the-rise jobseekers win interviews and build reputations through a start-of-the-art, online presentation tool. The President and CEO of DCS, Ken Diamond, explains this easy-to-use and effective tool. “WinTheView allows jobseekers to formulate a very comprehensive, impressive and and strategic presentation that demonstrates past accomplishments, focuses on strengths, and provides the company interviewing with an insight of how the jobseeker will hit the ground running through the establishment of a 30 to 90 day plan. The high level of preparation and quality presentation can dramatically improve interview performances and increase a candidate’s chance for getting the job. We are thrilled that Gayle Howard of Top Margin is again showing the pioneering spirit that she and her company are known for, as she becomes the first in Australia to offer our groundbreaking service to the Australian public.

January 31, 2009: Gayle Howard today announced a new partnership with career industry pioneer, Jason Alba of JibberJobber fame. Jason’s innovative personal networking site JibberJobber.com is a trailblazer in helping jobseekers create a personalised relationship management hub to log all information about contacts, jobs, and followup regimes to create a powerful centre of influence; not just for the job search but to extend throughout an entire career.

January 13, 2009: Gayle Howard successfully completed re-certification requirements for administering 360 Reach Version 4 — the next generation 360 Reach tool, helping clients to incorporate strengths, competencies, and personas into their professional careers and to measure professional reputation. Gayle is one of only four professionals in Australia qualified to coach clients with this tool.

June 6, 2008: Gayle secures qualification as a 360 Reach Certified Analyst trained in performing detailed analysis of feedback delivered via the 360° Reach Personal Brand Assessment System. Gayle now has the training to deliver insightful and actionable reports and coaching to clients on how to use this information to advance their careers or businesses.

April 22, 2008: Gayle adds another credential to her impressive tally with the designation of the Master Resume Writer credential from Career Management Alliance. In her acceptance letter, the Credentialing Master stated: You have earned your place among the World’s best resume writers. Each submission in your portfolio is beautifully and strategically tailored to your client’s objective and industry. Moreover, each presentation is formatted in a distinctive and sophisticated way. Your attention to delivering both outstanding content and visual appeal is evident”.

March 17, 2008: Gayle’s “Certified Career Manager” designation has been successfully renewed. The Credentialing Master of the Career Management Alliance stated “I am impressed with the diversity of professional contributions demonstrated in your portfolio. Congratulations – you continue to demonstrate the full range of industry acumen and commitment required to maintain your status as a CCM.”

January 25, 2008: Florida USA. A selection of Gayle’s anecdotes and advice will soon be featured in the new Career Press book: Job Search Bloopers: Every Mistake You Can Make on the Road to Career Suicide…and How to Avoid Them by Laura DeCarlo and Susan Guarneri, due for international release in August 2008. Available for pre-order now at Amazon.com and Target.com

January 13, 2008: Adelaide, South Australia. Gayle’s book, PS…You Need a Resume! has been picked up by Inkstone Publishing for exclusive distribution in Australia, New Zealand and Asia including the all-important market in China. Launch is due in Asia sometime in May with Australia and New Zealand following.

February 2006: Gayle’s work accepted for publication in book “No-Nonsense Resumes That Get Interviews and Job Offers”.

December 11, 2004: Gayle Howard’s resumes have been selected for publication in book “Expert Resumes for Computer and Web Jobs—Second Edition.

July 9, 2004: Gayle’s resume samples have been selected for publication in new book “Best Resumes for College Graduates to Land $75,000+ Jobs”.

February 2, 2004: Published Again! Gayle’s cover letters and resumes have been selected for publication in David Noble’s new book “Gallery of Best Cover Letters for People Without a Four-Year Degree”.

November 20, 2003: Gayle Howard was announced as the winner of the Australian Achiever Awards 2003 for excellence in customer service in the Office Services category, achieving an outstanding result of 99.79%.

August 22, 2003: David Noble, author and industry “guru” has selected resume documents by Gayle for inclusion in the phenomenally successful Gallery of Best Resumes, now in its third edition.

July 28, 2003: In the News! Check out the August edition of Men’s Health Magazine (Page 110) for an excellent careers article featuring Gayle Howard’s thoughts on “Rescuing Your Resume.”

June 14, 2003: Gayle Howard has taken up the dual role of International Resume Expert and Virtual Business Officer for the newly formed AORCP (Association of Online Resume and Career Professionals).

May 21, 2003: Gayle Howard resumes accepted in the soon to bepublished “Expert Resumes for Healthcare Careers.” From over 400 samples submitted for publication, only 100 were chosen, placing Gayle’s work in the top echelons of writers.

December 13, 2002:Gayle Howard’s resume samples have been accepted for inclusion in the forthcoming JIST publication, “Expert Resumes for Managers and Executives.”

October 29, 2002: 17 of Gayle’s resumes have been selected for inclusion in ResumeMaker® Deluxe 10.0, published by Individual Software.

February 2002: Gayle Howard has announced the completion of her new book entitled “PS…You Need a Resume”.

January 2002: Gayle Howard, has been awarded the prestigious CCM (Credentialed Career Master) designation by the Career Masters Institute – the first in Australia to do so.

July 28 2001: Gayle Howard has been awarded a second international certification as a Certified Resume Writer (CRW) by the Professional Resume Writing and Research Association (PRWRA).

July 24, 2001: Gayle Howard has had her resume samples published in the JIST Career Book entitled “Expert Resumes for Manufacturing Professionals” by Wendy Enelow and Louise Kursmark.

Melbourne June 15, 2001: Gayle Howard has been named a member of the Certification Team for the Professional Resume Writing & Research Association.

Mar 11, 2001: Gayle Howard has been published internationally with inclusion of her resumes in the new book, “Expert Resumes for Education Professionals” by J.I.S.T. Works, Inc.

Jan 12, 2001: Resumes created by Gayle Howard have been featured in Expert Resumes for Computer & Web Jobs.

Nov 9, 2000: Gayle Howard is pleased to announce her affiliation as a member of the Career Masters Institute™.